Every year, around 1.5 million wildebeest; 350,000 Thomson’s gazelle; 200,000 zebra; and thousands of eland and other ungulates (hoofed animals) participate in what has been called ‘the greatest show on Earth’, Around March, at the end of the short dry season, the grassy plains of the southernmost Serengeti begin to dry out and the wildebeest move on, heading towards the western woodlands.

The three groups of migrant grazers take advantage of different heights of grass, which means they stick to their own kind with only a small overlap in their distributions. The grasses of the plains have the highest protein content in the whole of the Serengeti, as well as being high in calcium.

It is unclear how the wildebeest know which way to go, but it is generally believed that their journey is dictated primarily by their response to the weather; they follow the rains and the growth of new grass. While there is no scientific proof of it, some experts believe that the animals react to lightning and thunderstorms in the distance. It has even been suggested that wildebeest can locate rain more than 50km away.

Around December each year, the migration starts to move into the Ngorongoro Conservation Area, where the plains are rich in nutritious grass, providing the herds with the best conditions for raising their newborn calves.

Although there is no real beginning or end to this migratory circuit – other than birth and death – it seems reasonable to call the wildebeests’ birthing season the start of the migration. Around February, they herds are on the short-grass plains that spread over the lower northern slopes of the Ngorongoro Crater highlands and around Olduvai Gorge. Some 400,000 calves are born here within a period of two to three weeks. That is approximately 8,000 new calves every day!

After bearing their young in February and March, the wildebeest herds begin to drift north, drawing with them thousands of zebras and smaller groups of antelope. The abundance of vulnerable calves means the surrounding predators also spring into action.

Gradually, the movement gathers momentum and, by the end of May, the wildebeest are starting to mass in the Serengeti’s Western Corridor. They grow in numbers, with huge herds forming along the pools and channels of the Grumeti River, which they have to cross in order to continue on their journey. This may not be as spectacular as the famous Mara crossings, but there are still enough wildebeest to provide the Grumeti crocs with a veritable feast.

By August, the herds have faced the challenge of crossing the Mara River and are spread throughout Kenya’s northern region and the Serengeti. In years when the river is in full flow, the panic and confusion at the crossings – combined with waiting predators and surging currents – can cause massive loss of life. But, even in years of relatively gently flowing water, the crocs take their toll – not to mention the lions and other large predators that patrol the banks, ready to ambush any wildebeest that make it to the other side. There is no single crossing: At some spots, there are just a few individuals, while others see a mass of animals moving without break for hours.

By October, the chaos has ended and the migrating columns begin moving southwards to complete the cycle. After the East African short rains in late October and early November, the wildebeest move down from Kenya and into the eastern limits of the Serengeti. By December, they are spread throughout the southern reaches.

By the early months of the new year, the grasses in the deep south of the Serengeti are lush with rain. This draws the herds – not only of wildebeest, but also hundreds of thousands of zebra and other plains animals. The cycle continues as the calving season starts once more and the herds begin their slow movements northwards. 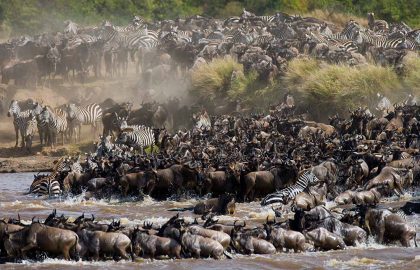 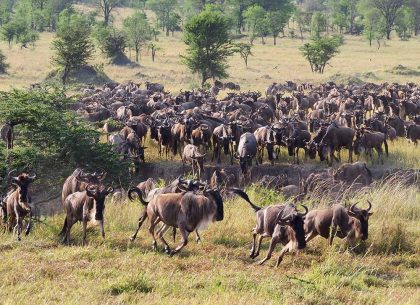 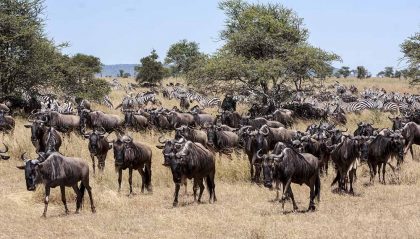 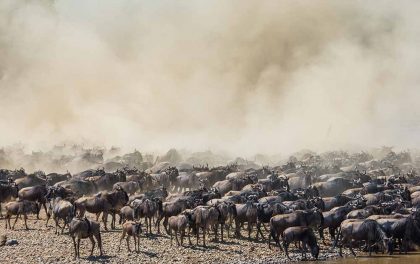 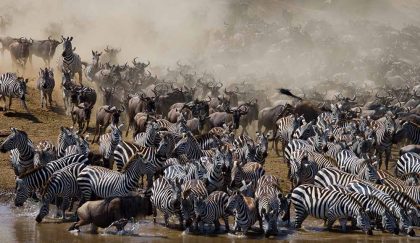 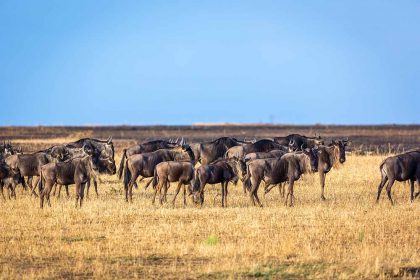 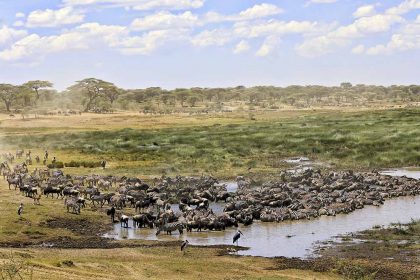 We use mobile camps that move around the Serengeti and Masai Mara through the year to ensure guests are in the best possible position to witness the Great Migration in all its glory. No matter when you decide to go on safari and see the herds, there will always be somewhere for you to stay and experience the best of the Great Migration.